I recently rediscovered this book by Messner. 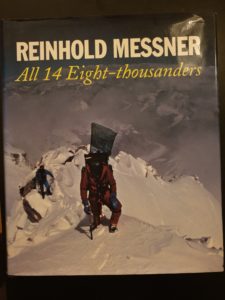 He was the first man to climb Mount Everest without supplemental oxygen. He then went on to be the first to climb all peaks higher than 8,000m without oxygen.

My favourite quote of his is “The true art of climbing is survival, and the point at which that becomes most difficult is when, having mastered what till then has been considered the epitome of achievement, you try to go one stage further. To venture where no one has been before, and where hardly anyone wants to follow – or even understands what it is you are trying to do. It is there, in that unknown region, where sensations and experiences are found that are of far greater intensity than any from the “well-grazed” lands.”  I added the italics for emphasis.

My favourite Messner book is “The Crystal Horizon” which is about, arguably the greatest mountaineering feat of all time, his successful solo attempt on Mount Everest from the North side in the August monsoon gap.