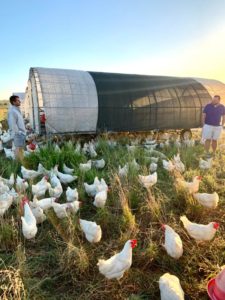 Mark has been responsible for many good things in my life. Having fun with our family, love of food, fabulous wine, hunting, reloading ammunition, charcuterie etc etc. He was the one who pushed me into starting my own butchery. This was whilst he was running the biggest grass fed beef operation in South Africa that he had built in KZN.

Mark moved to the UK nearly 3 years ago. He recently wrote this brilliant piece on regenerative agriculture with the best metaphor for comparing the fringe regenerative model to the mainstream destructive model.

Topsoils in the UK, Mark Muncer.

Depending on who you listen to there are between 40 and 100 harvests left in UK soils. Regenerative agriculture (RA) reverses this situation. The three hallmarks of RA are; producing nutrient dense food, creating employment and reversing the damage done to the environment by conventional agriculture.

After arriving from the South Africa in 2017, I was excited about getting involved in RA in the United Kingdom, as the rainfall here is famous and drought farming in the Western Cape for some years was tough and at times heart breaking.

Well my spirits were quickly dampened, as whenever I talked farmers about not spraying their fields with herbicides and pesticides or no-till or the idea of compost tea they lost interest in the conversation. They felt that I was insulting their time honoured practices. Incorporating animals into a cropping system was always the final conversation killer.

Things need to change, every farmer and agricultural participant knows this. However no -one wants to make the changes. Farmers are making less and less profit from more and more higher input farming practices whilst the real profits in agriculture accrue to the chemical companies and their consultants.

Farmers need to be the priority in the cycle of suppling food to people as they are the foundation link in the chain that is the food system.  The problem is that in this chain logistics, marketing, wholesale and retail are the ones making the money.

It is not only farmers who are affected by this poisonous system.  The note below was put up in our town recently.

The Parish Council has been contacted recently by a local agricultural contractor. They have reported seeing a number of people and dogs walking through (not around) the field when contractors are spraying fertiliser. These chemicals could be harmful to both dogs and public.

This field is producing cereals for the food industry. Surely our food system should be safe for humans and our pets at all stages of the production process?

I am dyslexic and so I have, since 2017, been struggling with how I relay this message about RA to farmers, people on the street and large scale food retailers?How do I find a way to explain the critical role of healthy topsoil and the practices to conserve our topsoil?

The ideal metaphor is a byproduct of these arable lands that we and our dogs are advised not to walk in. It is a universal food, that has been consumed for thousands of years. Even Jesus himself made many references to it. Most people in the world eat it, appreciate it and understand it very well.

BREAD. Conventional, chemical agriculture is the standard square loaf sold in all supermarkets whereas RA is the artisanal sourdough.

Modern chemical agriculture practices, are based on chemical analysis of the soil/dirt where a crop/pasture is grown. A consultant then advises on the corrections to be applied chemically. They work out the yield required and apply fertiliser to the area. They then spray the field constantly with more chemicals to maintain the forecasted yield. This is very much like commercial bread.

There are two experiments that I suggest you do at home. First take a slice of CBP bread and press your fingers into it to see the effect of compaction. Then add some water to the slice of bread and try it again. You end up with a sloppy mess that doesn’t look like bread anymore. It’s very much like most of the UK agricultural soils.

Try the same experiments with the sourdough. You will see that its better with impact and holds water better. It does not become a sloppy mess either.  Very much like the soils of RA farmers. Soils that breathe and are able to hold water.

Another observation is that the sourdough is imperfect and no two loaves are the same. Whilst CBP bread is the same the world over. This is much like your topsoil. No two lands are the same. Modern agriculture is centered on perfection, all looking the same and the recipe for the treatments are uniform. RA is exactly opposite, rejoicing in the imperfections, celebration of difference and multilayer nurturing of problems.

RA is as easy as making Sourdough Bread. There is no fancy equipment needed nor complex formulas. It is simple in its nature. The first attempts may not be brilliant, with a little practice and vast amounts of patience you will succeed.

Poor drainage leading to excess runoff water and accordingly brown rivers are serious issues in the UK, costing £billions and risking the lives and homes of people.

There are numerous examples of how RA farmers reverse this damage, the most famous and successful being US farmer, David Brandt, https://www.no-tillfarmer.com/authors/107-david-brandt