The only way to feed the 9 billion by 2050 is to produce our food conventionally. In other words we must tolerate caged animal agriculture and soil destructive, pesticide heavy grain growing methods.

This is the great lie that is so ubiquitous you can ask anyone how to feed the world and they will repeat the above. In a previous life, as a Goldman Sachs stockbroker, I also believed the lie. Organic and regenerative agriculture are dismissed as feel good but misguided efforts.

This brief blog post is about debunking this lie and offering solutions that produce clean, nutrient dense food, create employment and reverse the damage done by conventional agriculture. 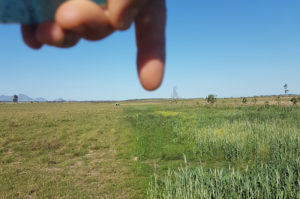 (the photo above is from my TEDx talk, link below)

Please remember that South Africa has, twice in the last 2 years, been rated as the unhealthiest country in the world.

The first part of the lie is that the world is being fed by this system. On the contrary, humans and the planet are sick. The list of human health issues is exhaustive but the two standout issues are human fertility which is in precipitous decline and the fact that cancer is the biggest and fastest growing speciality within medicine. A similarly exhaustive list of the damage to the planet from agriculture starts with rainforest destruction, topsoil loss, carbon and methane emissions etc, etc.

The second part of the lie is that there are going to 9 billion people on the earth by 2050. As mentioned above, the human race (in the words of the inspirational Vandana Shiva) is committing species wide suicide and this is very clearly captured in Shawna Swan book entitled Count Down. We will never hit 9 billion people.

The third part of the lie is that the world already produces enough food to feed between 11 and 14 billion people but most of that food is lost all along the chain to end consumer and a lot of it is grown for the wrong use like feeding grain to cattle or using corn for ethanol production.

None of the solutions proposed are based on any new/unproven technology and so all of the proposed interventions are possible. Their probability of being implemented is another matter entirely.

This section is to be read with the attached spreadsheet Feeding South Africa which shows exactly how many kgs of beef could be produced and tons of carbon sequestered if we chose to farm regeneratively.

We have not changed the pork and chicken/egg numbers produced as we are merely proposing moving them out of their cages and onto pasture.

South Africa could not only produce all the beef it consumes but produce an additional 200 thousands tons for beef for export. If we applied rotational grazing to all our grasslands and veld we could sequester 3 times more carbon than the whole country emits.

This is no scientific study but the information that we used is freely available (see sources) and is based on my own experience of farming and carbon sequestration.

There are a couple of assumptions which might be considered naive.

VEGANISM IS NOT THE SOLUTION.

This misguided movement will only make the environmental crisis worse. See my TEDx talk here where I  explain how a plant based diet is incapable of regenerating anything.

WHO WILL ENABLE THE SOLUTIONS?

Whilst it would be the duty of the government to ensure a healthy population and environment it is, sadly, apparent that no help will come from that quarter.

For years I believed that consumers could be the change but I now believe that it is only big retail who can initiate that change.

P.S. A big thanks to my colleague Lizahn van Gend who has done the number crunching and data collection.