We are more than a year into mulching our vineyards with chicken feathers. What started off as an experiment is now a cornerstone of our vineyard management program.

A mulch is a soil cover of organic material. We tried for years to find sheep’s wool so that we could do what Johnny Ferreira does in the Eastern Cape on his lemon orchards (he mulches with sheep’s wool and does nothing else except harvest lemons twice a year…). It took a visit from some Kenyan farmers to get us to experiment with feathers and not wool.

The photo below shows clearly where the feathers were applied and where not.  The dark green rows received the feathers and the light ones did not. It is our Chenin Blanc vineyard and I used my drone to take the photo in late August. 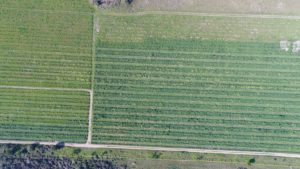 Now I realise that there are many of you who don’t trust your eyes and want something more scientific. We have two of these items for you Cartesians. Both relate to the Cabernet Sauvignon vineyard where we started this experiment in late May last year.

First is a report from our Italian pruner, Livio Tognon. 6 years ago we were the first wine farm to start pruning on the vine life prolonging Simonit Sirch method. https://simonitesirch.com Our main man Livio has been with us since the first day. He has got to know our vineyards very well and so his report on what he has observed as a result of the feathers is instructive. Click Livio observations, Aug 2019 to open his report.

Second we persuaded UCT (Stellenbosch University have never wanted to work with us) to send us one of their masters students to do a study of the Cabernet Sauvignon vineyard where we mulched part of it. Lily did a great job. Her report is here Rethinking Mulching and it makes for fascinating reading. The most interesting part for me is the chart on page 10 of the difference in nutrients.

I took this photo today. On the left is the first row of the Merlot vineyard which was mulched with feathers in April. All the rows to the right, with much less vegetation, have not received feathers. 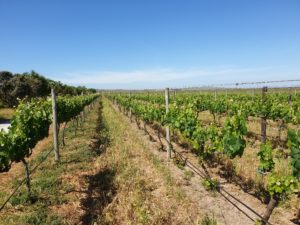 The numerous benefits from this program are that no fertiliser is needed, the mulched soils are at least 14 Celsius cooler which means a less stressed plant and happy soil microbes. It is too early to tell how much the yield will go up but Livio’s pruning observations are very promising.

Finally in South Africa there are 19 million broiler chickens killed every month. 85% of their feathers get rendered and mixed into chicken food. The rest are buried except for the ones that come to us from our local free range abattoir.