South Africa’s poor are currently bearing the brunt of meat legislation that just doesn’t exist. Furthermore, in a continuation of anti-poor legislation that has become the hallmark of this government, new legislation coming into effect next year will reduce the protein content of these so-called ‘meat’ products by 20%. Humans need protein to build their bodies. The poor will be paying the same for less nutrition. 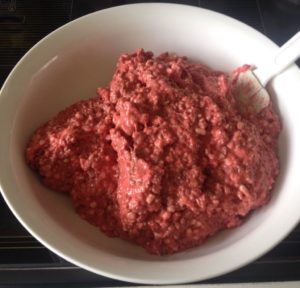 You assume that the photo above is of beef mince. It is not. It is being sold as beef mince. It would have been illegal before Aaron Motsoaledi removed the definition of meat on the 10th of May 2019. The big national retailers have jumped on on this and are screwing their customers like only they can. 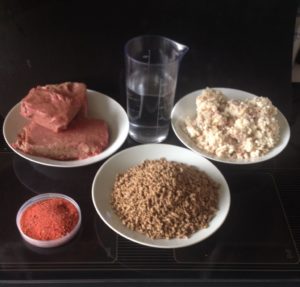 The actual ingredients of what you think is beef mince are clockwise from top left, MDM, water, beef kidney fat, soya protein isolate and the spices.

MDM is mechanically deboned meat,  a paste produced by putting chicken carcasses under high pressure through a thin sieve.

Soya protein isolate, the vegan protein, is what is left after the oil is removed (this becomes margarine and frying oil). There are no foods near soya and it’s derivatives for estrogenic activity. Furthermore the multi species Brazilian rainforest is being cut down and replaced with a monoculture of soya. The poison Glyphosate is also what enables soya to be grown.

The spices will all be irradiated (ask the folk of Fukushima or Nagasaki if they approve of radiation) and contains lots of phosphates which ensures that the water binds to the meat.

More on the meat soon but first the government has also shown it’s contempt for the rural poor by ensuring that the worst of the Bantustans, the tribal chiefs, remain the sole arbiter in these areas. Read this article on this subject.

After the outbreak of the listeriosis in 2018, the previous Minister of Health’s repeal of all meat regulations on 10 May 2019 went by relatively unnoticed. And with no new legislation to replace those until the 4th of April 2020, consumers are at the mercy of the processed meat industry and their patrons, the big national retailers.

The big retailers have moved quickly as a result of this bureaucratic ineptitude and they are now selling beef mince which only contains 60% beef for one retailer and 75% for another. This would have landed them in jail before 10 May 2019.

South Africa is currently the unhealthiest country in the world according to the Indigo Wellness Index. Products such as Russians, polony, and various other processed meats are mostly what the poor consume for animal protein. This is however not 100% pure meat. It’s usually a combination pork, beef and chicken based ingredients from fatty tissue, head meat, intestines, bones and meat blasted off carcasses, hooves and claws. It also contains rainforest destroying soya, water and a combination of toxic chemicals. The World Health Organization has declared that processed meats are known to cause cancer and increases your risk of bowel and stomach cancer.

Before the current regulations were scrapped in May 2019, the South African meat industry abided by regulations that were first published on 28 March 1930. These were regularly updated and formed the backbone of all other regulations and permitted additives. It has always been the basis of all formulation and labelling requirements of South African meat products.

These identified a 95% real meat processed product group (placed in a higher price bracket) and a 75% meat group (costed lower for the poor to access), some of which may have also been made from plant or animal origin proteins, oils and fats. The law specified how each of the above group could be prepared. The relationship of Nitrogen, Protein and Lean meat was used to calculate the lean meat equivalent content. It also covered vegan options made from plants only.

DAFF (The Department of Agriculture, Forestry and Fisheries) has said that on 4 April 2020 they will enact new meat legislation, which will see a radical reduction in the current content of animal protein used in processed meats from 75% to 60% in the one group and from 95% to 90% in the other.

According to Dr. Francois Mellet, a food scientist and Director and Founder of Functional Foods, who is an advisor to me, the much appraised VC9100 promulgated by the DTI, which was publicly launched after the listeriosis outbreak, fails to address composition standards. “The implication is that the meat industry currently does not have to comply with any protein or fat content, while consumers of the 75% group are still purchasing these products for nourishment. Until the decrease from 75% to 60% is officially written into law, meat products may contain anything, except nutrition”.

There is a way to feed the poor highly nutritious protein that won’t only solve our health and hunger crisis, but also contribute positively to alleviate our unemployment crisis. Regenerative agriculture uses no chemicals, or fertilisers and works to build the soil through rotational grazing which also reverses climate change by storing Carbon in the soil.

If more consumers said no to conventional farming methods, as afterall every time you eat you choose your farmer, and chose regenerative farmers then we would be eating nutrient dense food from farmers who create employment and heal the earth through their farming methods.

Finally can someone please point out to Zweli Mkhize that he needs to undo what his predecessor did so that the poor can be protected from the retailers. He has the legal power to do this.