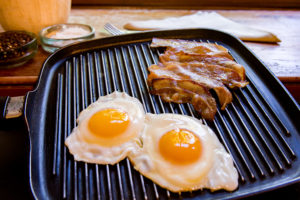 The secrets of bacon revealed

It’s not unusual for bacon lovers to fight over the last rasher in the pan. After all, the salty, smoky flavour and seductive aroma are what tends to turn us into raging bacon junkies in just one whiff.

Bacon is thought to have appeared on dinner tables in China thousands of years ago. The curing process has remained relatively the same for centuries. In fact, all sorts of meats used to be cured as a way to preserve them, especially in the absence of refrigeration. Three simple, yet natural ingredients were used: smoke; air; and salt harvested from springs or the sea. Salt was, for a very long time, considered a precious and valuable commodity and it wasn’t easily accessible.

In 1920 a scientist found a way to produce artificial salt known as sodium nitrite and potassium nitrate. This invention changed the way meat would be cured and preserved forever. This new type of salt was easier to access, it was cheaper and it also seemed to cure the meat faster. A perfect solution for a growing industrial era of that time.

The long-term effects of eating nitrites and nitrates weren’t realised until 2015, when the World Health Organisation declared it as carcinogenic, which means that it has the potential to cause cancer. Not great considering bacon is such a popular source of protein and fat.

Angus McIntosh of Farmer Angus is a regenerative farmer based in Stellenbosch. He applies the organic method to his bacon, for which he uses only the most natural ingredients. He shares his insights into bacon’s popularity, its production and why organic is better for your health.

What makes bacon so irresistible?

Easy, bacon fat. It’s been called the sixth basic taste. When the fatty acids in bacon break down as it begins to cook, it erupts with a mountain of flavours and aromas. These are furans which are sweet and nutty; aldehydes that deliver a green, grassy note; and ketones that taste buttery. The combined taste of these result in what everyone calls bacon. Even before the pork belly or loin is cured, this flavour chemistry exists.

The breed and diet of a pig, as well as the curing process, also determines its end flavour. When smoked, the smouldering wood releases acrid-smelling phenols as well as sweeter-smelling compounds, known as maple lactone.

Why is bacon pink?

Bacon is not ordinarily pink. In conventional curing processes, sodium nitrite (a.k.a. pink salt) is added to the meat. Because it’s highly toxic, it’s dyed pink to prevent accidental ingestion. According to a study done at Oxford University, the exact toxicity is 71 milligrams per kilogram. If you weigh nearly 100 kilograms and ate 7.1 grams, you will die. What pink salt does is bind the oxygen carried by your blood making it unavailable to your cells. The reason pink salt is used in the curing of bacon is to kill bacteria said to cause botulism (which was recently found to be false thanks to a leaked study done by the British Meat Processors Association (BMPA)). Pink salt also intensifies the pink colour of bacon, which most people are now accustomed to and associate with the meat being fresh. Pink salt also intensifies the flavour.

The organic approach to bacon

Organic curing uses three natural ingredients. Natural, unbleached salt (rock, sea, spice), smoke, and air. It’s the same method that was used for centuries. One pork belly takes up to 24 hours to soak in a brine consisting of salt and optional unrefined sugar or spices before it’s double smoked. All the processes are natural and are not harmful to the farmer, the workers or those eating the bacon. The bacon is brownish in the colour because no chemical nitrites or nitrates are added. There are no additional flavourings, preservatives or chemicals added.

Nitrites and nitrates are in fact found naturally in soil, water, plants, and even in our own bodies. They are naturally consumed by humans daily. Some of the highest concentrations are found in green vegetables which have been thought to offer cardiovascular and other benefits. However, as always, the dose makes the poison and only a certain amount of naturally occurring nitrates is actually good for you. Which is why adding additional nitrites and nitrates to our food, especially chemical versions, is completely unnecessary and is not good for our health.

So, for many hog fans, giving up bacon is not an option. McIntosh recommends avoiding bacon that is overly pink is a good start; remember that naturally cured bacon will be a bit brown in colour.; and choose bacon that is sourced from an organic pig farm where the animals are raised in the most natural, loving and kind environment as possible and that have not been fed with GMO feed.