We are now 100% compostable in our retail burger packs. Our first attempt failed because the cellulose is too flimsy for the retail shelves hence the stackable, protective boxes made by the great folk at UVP Veltopak.

In addition, the beef comes from our farm, Spier in Stellenbosch, where the herd is rotationally grazed, leading to Carbon sequestration and so your purchase of these patties reverses global warming and as importantly ensures that no plastic enters either the ecosystem or the ocean. Another bonus is two weeks shelf life in the fresh section prior to the need for freezing. 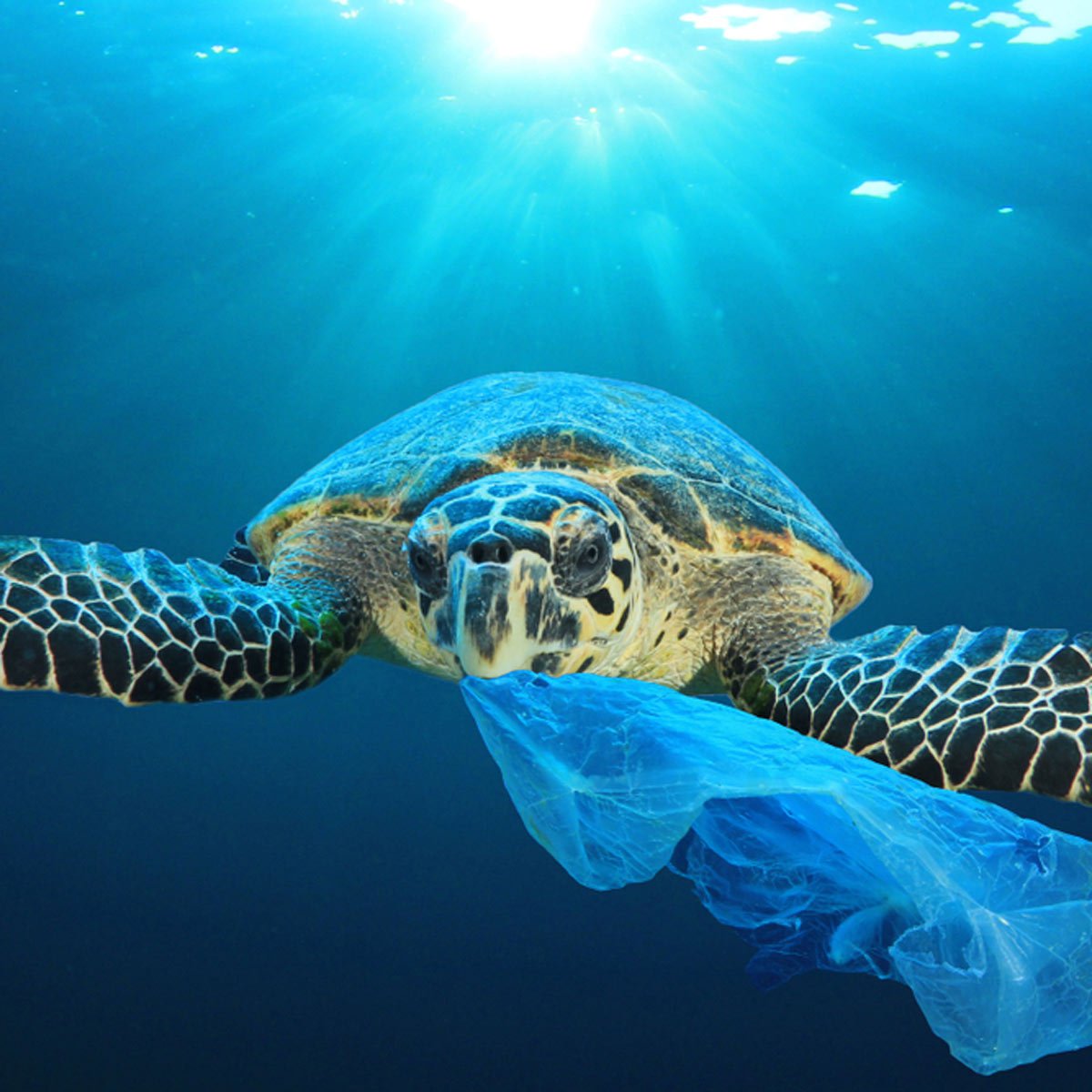 Turtle populations are under pressure because they are dying from ingesting plastic which looks a lot like their staple diet of jellyfish. 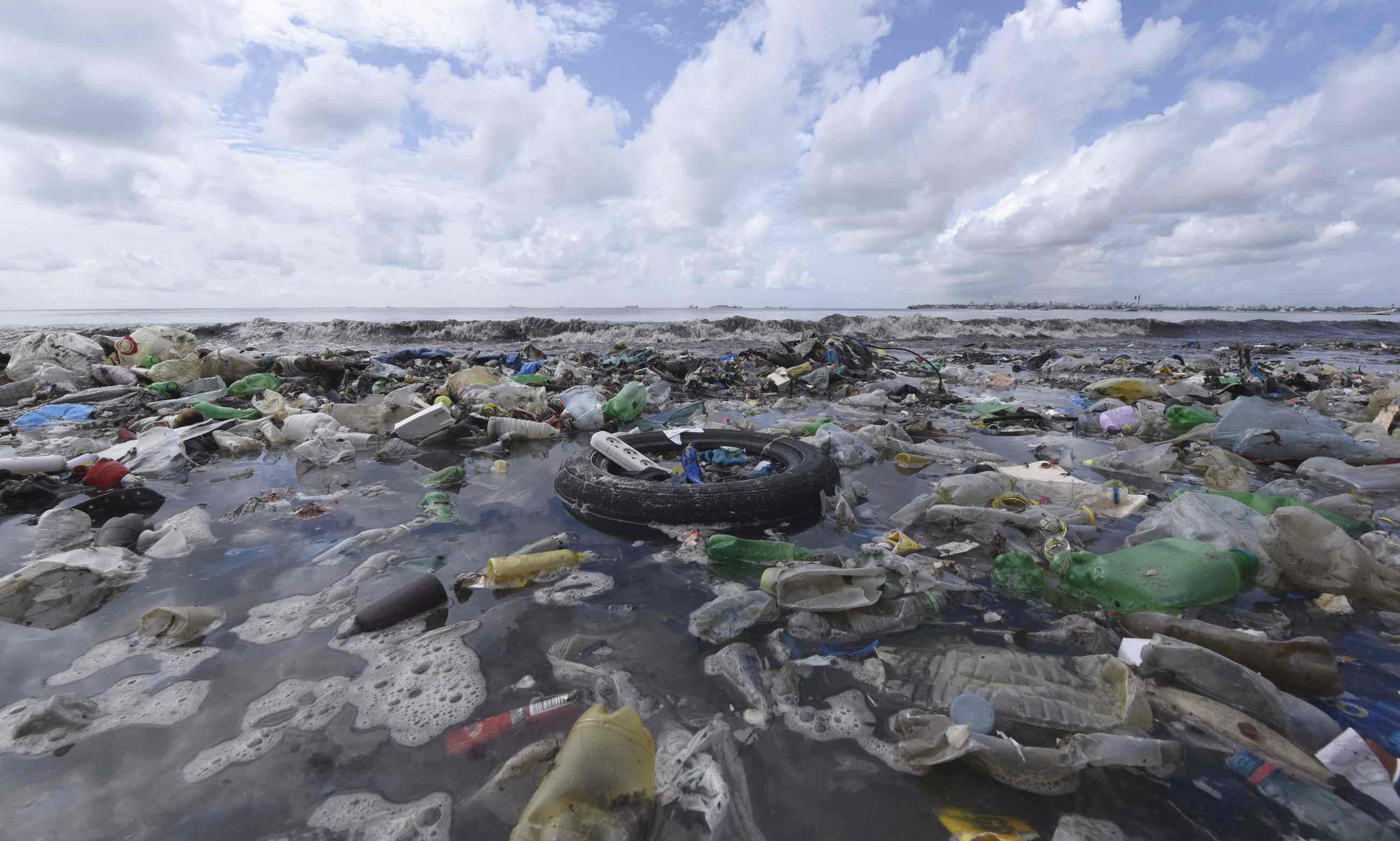 It is estimated that there are more than 25,000 tons of plastic in the Pacific alone. The biggest plastic island is twice the size of the state of Texas, in other words the same size as South Africa.

The reference to another world first relates to our farm being the first in the world to have sold Carbon credits for increasing the Carbon content of our soils in the pastures where our cattle graze. This is an example of regenerative agriculture and the vegan movement has excluded itself from this land healing exercise as you cannot farm regeneratively and produce vegan “foods”. I have written a detailed blog on the defeatist nature of the vegan belief. Click here.

We sell our patties in two sizes. Phello is holding the 200 gram pack and Petros the 100 gram pack. There are 4 patties in each pack.

The butchery team likes being inside during the heat of summer but they blink like moles when they come out into the light like the rest of the farm. 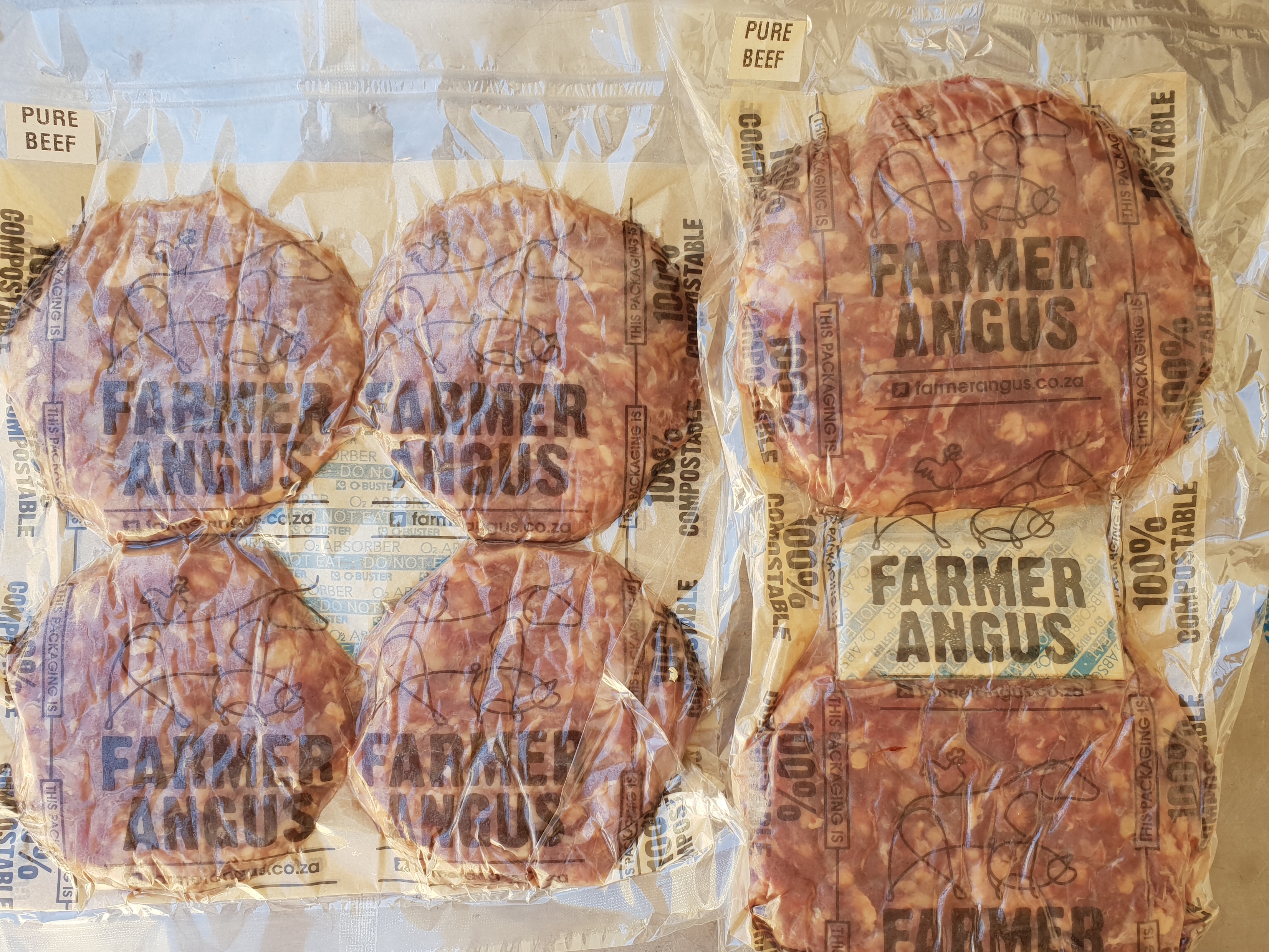 The item that has delayed us the most is the adhesive label. We have had to import it. I can send you the spec sheet if you want. It is made from sugar cane. We had to pay a massive customs tax. I would have thought that our government was interested in encouraging compostable materials instead of polluting ones. The adhesive label is available from Elevate Packaging. If you click and order make sure you claim the discount. We had great service.

A few notes on the ingredients. The salt is from Khoisan. It is unwashed and is also a key ingredient of our free choice mineral lick for our livestock. The psyllium husk is gluten free and holds some of the moisture and the rosemary hydrosol is a preservative.

Steve has been a tremendous support in this quest for 100% compostable packaging. 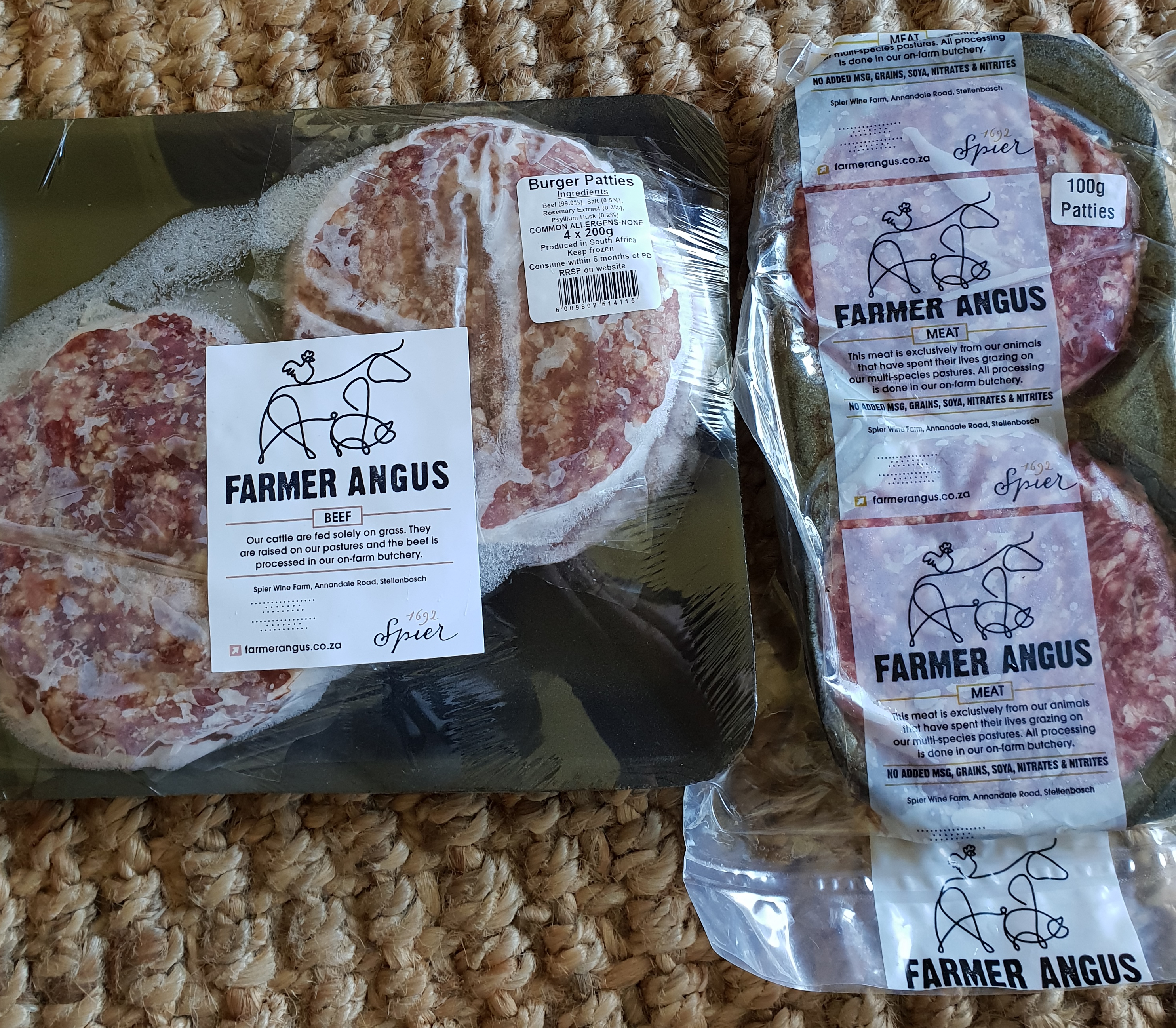 Above is our old packaging. The new compostable packaging is more expensive. A classic example of true cost accounting. (As a management accountant by training I wrote this on the aforementioned subject) The cost difference on the 100 gram patty is R6,48 per pack and on the 200 gram pack it is R7,38. We can’t expect you, dear client, to pay for all the difference and so we are going to split the difference and accordingly the price of the 100gram patty pack goes up by R3,24 and the 200 gram pack by R3,69 with immediate effect. If you don’t see the new packaging immediately that is because we are running our old stock down. 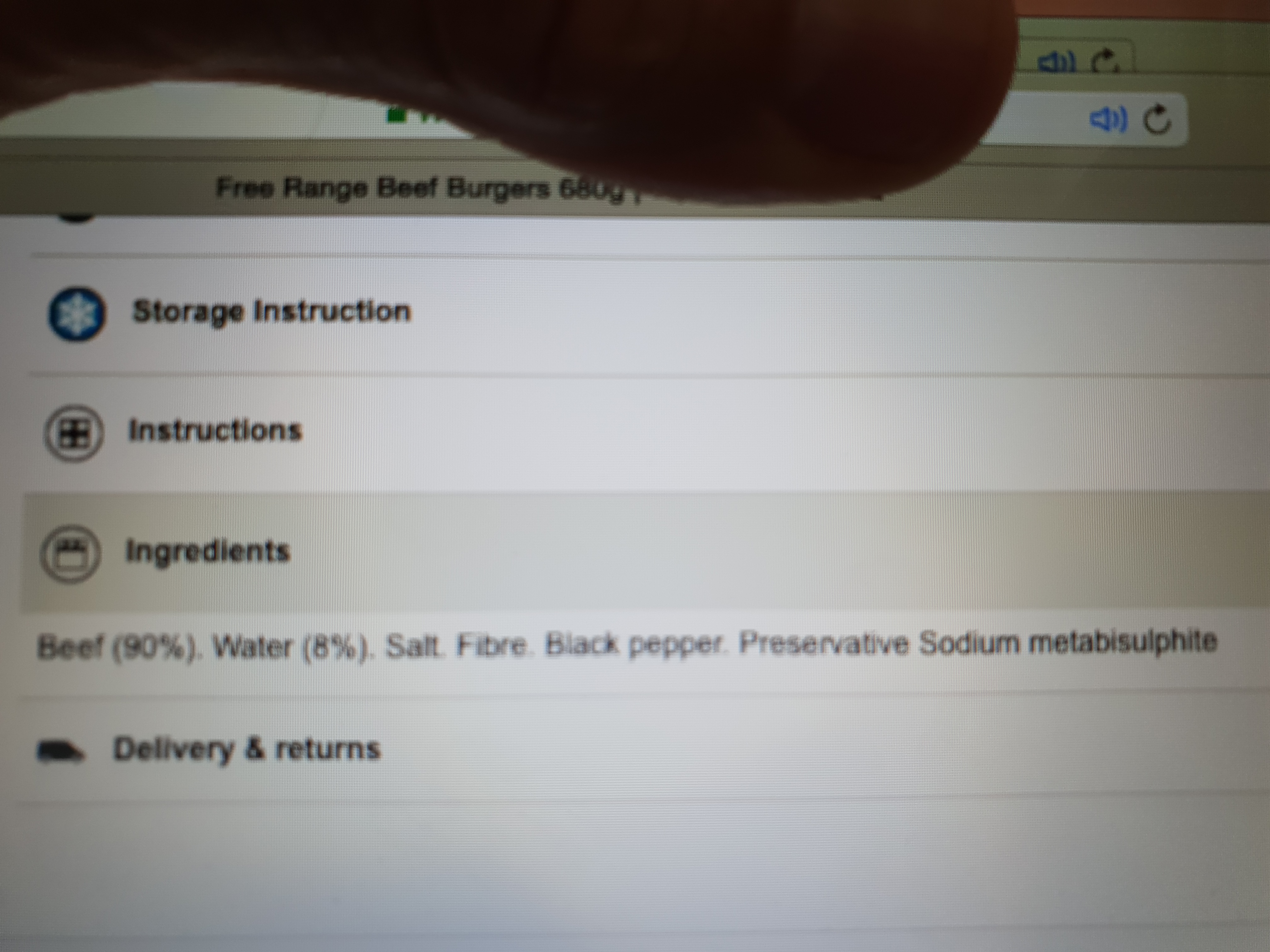 The obvious question is why is it little me who is the first to do this? Why not our great green national retailer who spend a huge part of their marketing telling us how their farming is future orientated? We are a tiny business killing 4 cattle a week whereas they are a national behemoth killing thousands. The answer is that they are no different from any national retailer anywhere in the world. They would much rather be selling you water and fibre at meat prices than supporting regenerative agriculture. The ingredients above are what is in their free-range burger. I can understand adding water, fibre and sodium metabisulfite to the horror that is feedlot/grain-fed beef but why denature free-range beef. It just hurts the cause of free-range.
In case you did not know what sodium metabisulfite was read below.
Sodium metabisulfite oxidizes in the liver to sulfate which is excreted in the urine.
It may cause allergic reactions in those who are sensitive to sulfites, including respiratory reactions in asthmatics, anaphylaxis, and other allergic reactions in sensitive individuals.
It is commonly used in homebrewing and winemaking to sanitize equipment. It is used as a cleaning agent for potable water reverse osmosis membranes in desalination systems. It is also used to remove chloramine from drinking water after treatment.
Added to local anaesthetic (lidocaine etc.) solutions to prevent oxidation of vasoconstrictor adrenaline and thus improve the shelf life of the solution[citation needed]
It is used in photography.
Concentrated sodium metabisulfite can be used to remove tree stumps. Some brands contain 98% sodium metabisulfite, and cause degradation of lignin in the stumps, facilitating removal.
It is also used as an excipient in some tablets, such as paracetamol. Approximately 0.5 mg is used in epinephrine autoinjectors such as the EpiPen.

The only way a big national retailer (the big guys are very different to those local ones who support us) makes money is by screwing their suppliers. I wrote this article exactly 6 years ago on the role of the retailer in the massive strikes that were happening across the Western Cape farms. Nothing has changed.

In case you forgot reading it above the great Pacific garbage patch is the size of South Africa.

Thanks for supporting us
Angus